Ancient, many and unknown small monuments


In Brittany, and especially in Leon, we know them without knowing it because we can see them everywhere. It is most often the granite shafts of the crosses that are found along the roadsides and it is clear that the Christian symbol that surmounts them is not of origin. It has been added much later. Sometimes we simply see the engraving of a cross carving the stone.
These are Gallic steles that were later christianized and almost always moved. Like all other calvaries, they were planted either in dangerous places, fords, bridges, crossroads, where the faithful feared that the devil would come to take their souls away, or as prayer stops for pilgrims and travellers. The addition of a cross or an engraving is not the only way of christianizing the monument. It's likely that without this sacred reuse, these small monuments would have simply been destroyed. However, in some places, the steles were respected, graves were added to the urns and a christian building, chapel or church was erected. For example, at Bono, in Morbihan, where the visitor to the parish enclosure is welcomed by an ovoid gallic stele included in the enclosure. In the Pays d'Iroise, the same applies to the chapels of St-Samson and St-Ourzal as well as the church of Portsall. In Ploudalmézeau and Milizac, the wall of the parish enclosure grazes it to leave it carefully outside while respecting it.
However, some steles have not been re-appropriated by the christian religion, but have been moved and reused in buildings. 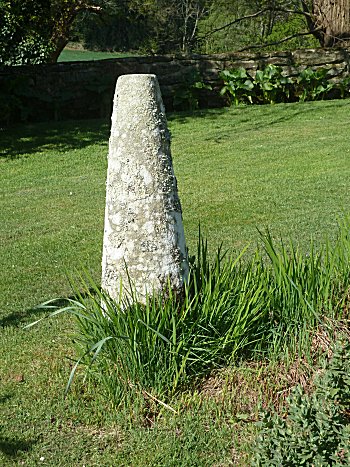 Few of these monuments have remained intact in their original locations. They are sometimes still found buried in the vegetation. When excavations were carried out at their foot, they often revealed one or more cinerary urns whose manufacture can go back to the VIth century BC. Archaeologist Marie-Yvane DAIRE proposes for the erection of steles a dating range from the end of the VIth century to 250 BC. A custom that would have lasted only two and a half centuries.
They are therefore funeral monuments of the Second Iron Age that deserve our respect. 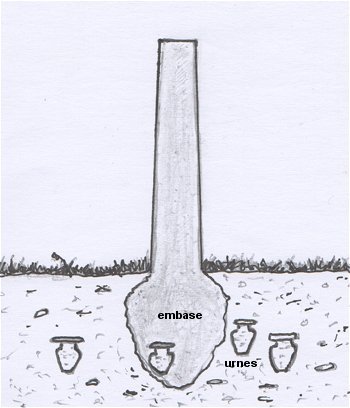 Section of a funerary stele

The steles could be cut directly from a block of rock, almost always granite. In the Bas-Léon there is no shortage of granitic outcrops in the fields.
Archaeologists believe that some steles are, in fact, re-cut menhirs. It is also likely that many wooden steles have been erected, but only the wedging stones placed at their feet have survived.

There are two types of stone steles:
-   - "Low" steles, i. e. those whose height does not exceed their width, which are often hemispherical or ovoid, sometimes quadrangular, either with a base or placed direct on the ground. Very widespread in Morbihan, they are much less numerous in Leon.

-   - "Tall" steles, but rarely higher than a man, truncated or pyramidal, with a round, rectangular or polygonal cross-section. They are very numerous in Finistère. These are obviously the ones which have most often been chosen to support a cross. 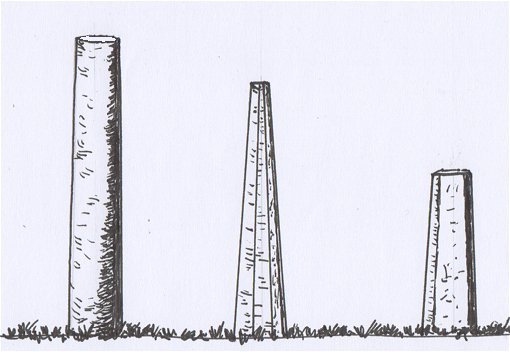 We can see that the buried part, the base, generally much larger, is simply rough in size.
On the other hand, the above-ground part is smooth, well worked, sometimes decorated with grooves or cavities.
The urns that have been discovered at their feet are often common pottery containing the ashes of a deceased and covered with a flat stone. They are the ones that allow dating when their remains of carbon-14 bones are analyzed or when pottery is compared to other pottery that has been dated. 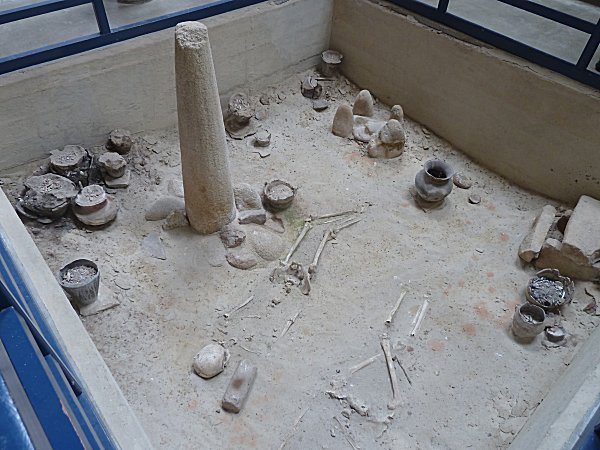 Reconstruction of cinerary urns at the foot of the stele
from Roz-an-Tre-Men to Plomeur.
Prehistory museum of Penmarc'h (Finistère).

It was only in the middle of the 19th century that researchers began to take an interest in these small monuments, which were very widespread in Leon, Cornwall and Morbihan. In Léon, mention should be made of the abundantly illustrated manuscript written in the 1920s by Maj. Etienne MOREL, as well as, 40 years later, the surveys carried out by teacher Louis TALEC. In the book below, by Marie-Yvane DAIRE and Pierre-Roland GIOT, we will find an inventory of the gallic steles of the Leon as well as the publication of the manuscript of Commander MOREL dated 1926, which already constituted a very thorough study of these funerary stones steeped in history. His many drawings are particularly valuable when looking at the evolution of steles in a constantly changing environment. 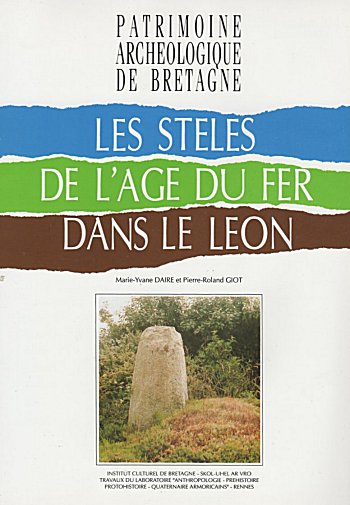 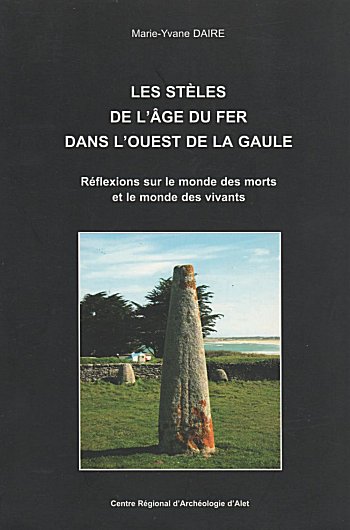 
The Penmarc'h Prehistory museum gathers, among many other objects, a large number of gallic steles of various sizes from all over Finistère and brought there during the first half of the XXth century in order to preserve them. A visit to this exceptional museum in the Bigouden country is a must for anyone who is curious to learn more.
All information at 02 98 58 60 35. 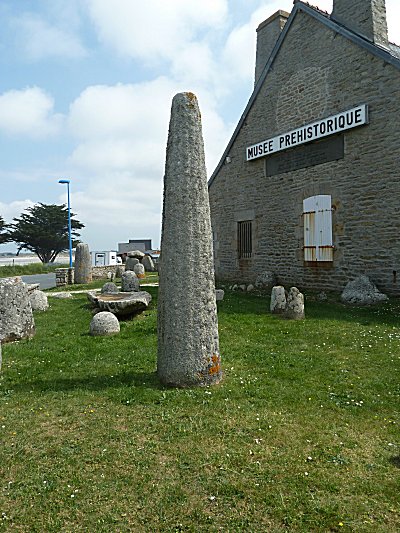 Thanks to Jean-Yves Eveillard, lecturer in ancient history at the University of Western Brittany and researcher at the CRBC, for his help, his expert advice and his loan of documents.

Plougonvelin :
The steles of the "Gibet des Moines" in St-Mathieu

Locmaria-Plouzané :
The guardians of the Town Hall square 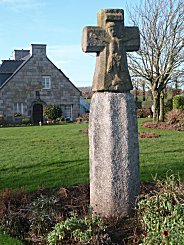 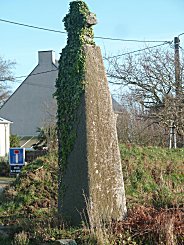 Locmaria-Plouzané :
The steles of the La Madeleine calvary 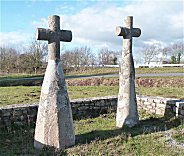 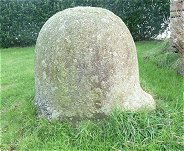 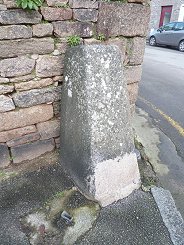 Ploudalmézeau :
The Gallic stele of the city centre 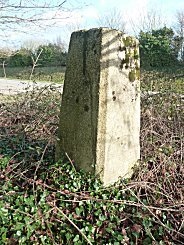 Ploudalmézeau :
The beautiful stele of Stang an Heol 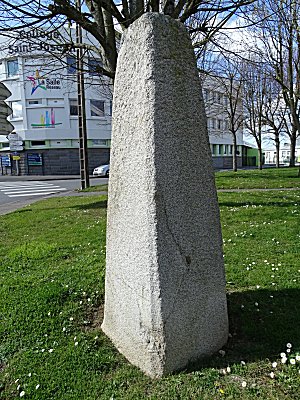 Ploudalmézeau :
The stele of the place
of General de Gaulle 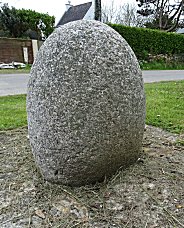 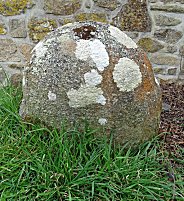 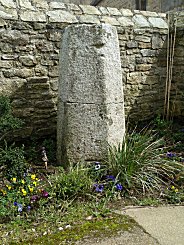 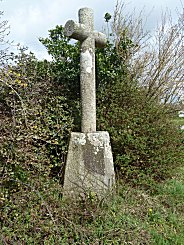 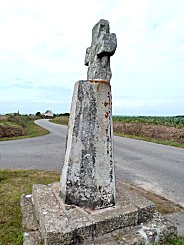 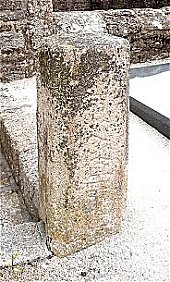 Lanrivoaré :
The engraved stele
of the Cemetery of Saints 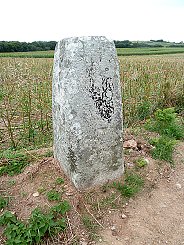 Plouarzel :
The stèles of the golf road 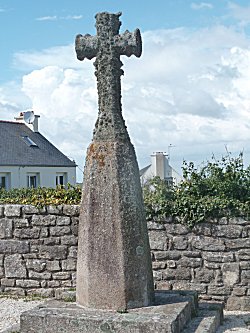 Plouarzel :
The beautiful stele of the cemetery 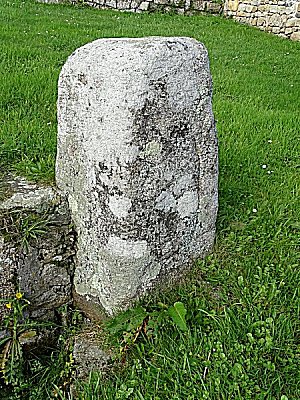 Plourin :
The fallen stele of Penn an Dour 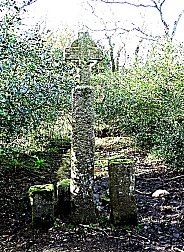 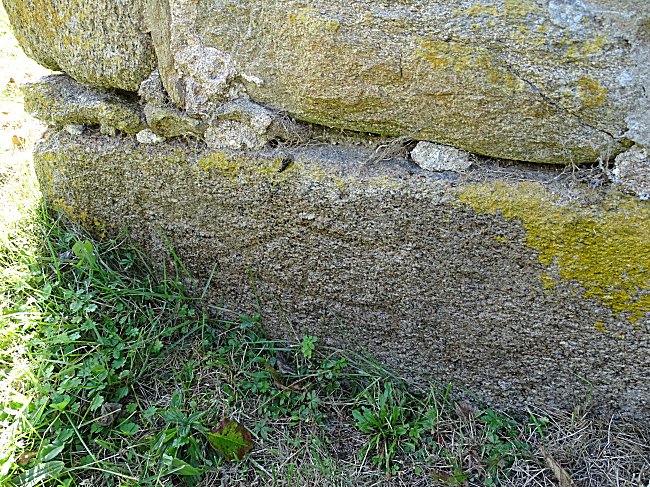 St-Renan :
The engraved stele of the Ponant Museum