The Gallic steles of St-Mathieu 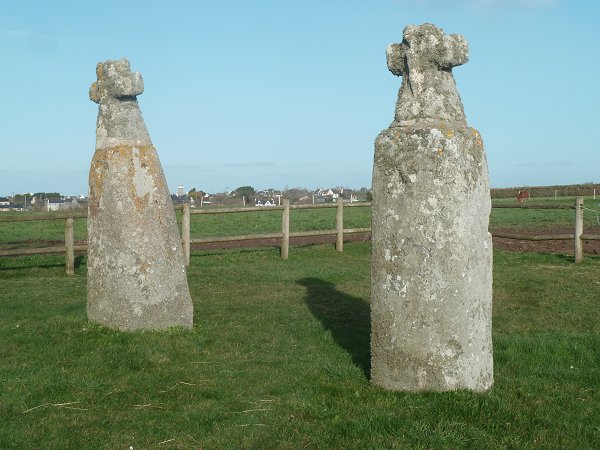 Under their crosses, these two stone steles, which appear to be twin brothers, do not attract many tourists. The passer-by sees there ordinary crosses. But their bases are much older than the ruins of the neighbouring abbey and it is necessary to stop there to observe their details.


Access :    From Brest, take the D789 towards Le Conquet. After about fifteen kilometres, at the Lannou roundabout, turn left towards Pointe St-Mathieu, dominated by its lighthouse. About 150m before arriving, we can see on the right, very close to the road, the two Christianized steles. It is possible to park nearby.
From Le Conquet, follow the tourist road to Plougonvelin. At 6 km, at Pointe St-Mathieu, park on the lighthouse parking lot. Continue on foot towards Plougonvelin. 150m further on we can see on the left the two crosses.

They are called "Gibet des Moines" ( Monks gallows ). But this old name was wrongly attributed to them. First because the monks of the Abbey of St-Mathieu did not execute their convicts at this place, but further on in "Creac'h ar Justis". Secondly, because no traces of gallows have ever been found at this location.
These are in fact two ancient Gallic steles that may have marked funeral urns located at the entrances to the small village that occupied this point of the coast during the Iron Age. They had been Christianized much later by the addition of stone crosses, probably when a first monastery was built on the site of the current ruins of the abbey.
Both steles are not identical. It can therefore be assumed that they were originally built at different times and perhaps also in different locations.

The one closest to the road is a rectangular parallelepiped. It is 1.90 m above ground and has a circular depression on its west side. Four small cavities have been dug on its east side. 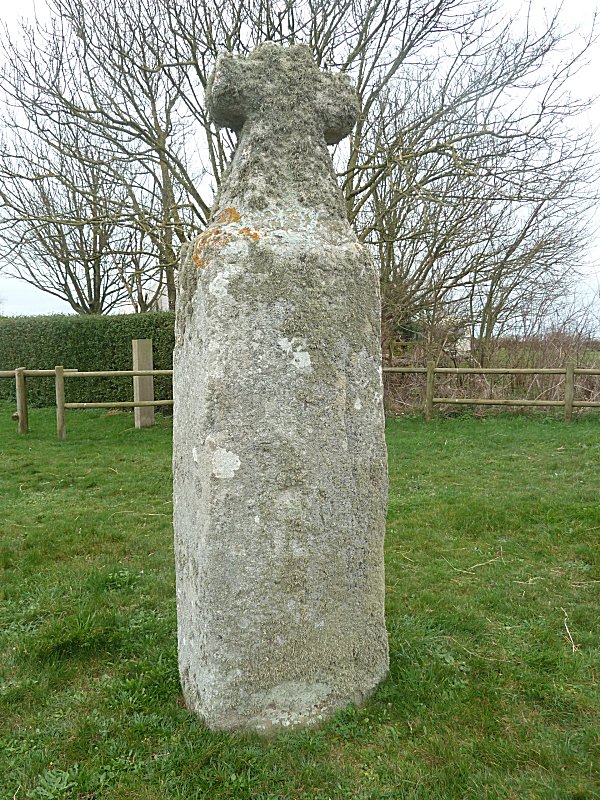 The other stele is a truncated pyramid with cut-off sides. Its height is 1.68 m. There are about twenty small cavities on its eastern side. 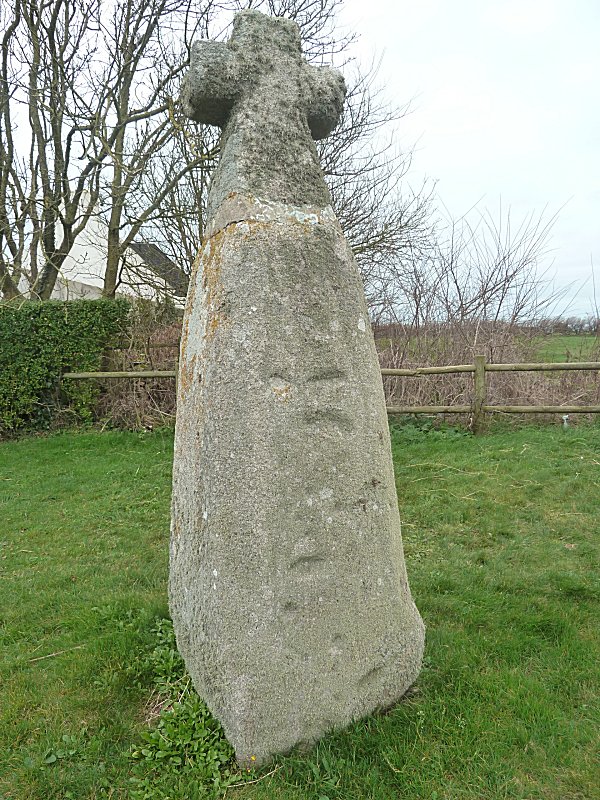 The cavities ( in french : cupules )

It is absolutely necessary to stop the rumour of the XIX th century that some people still continue to spread about these cavities : we note for example in "Les Echos de Pen ar bed", parish bulletin for the summer 2015, Plougonvelin-Le Conquet-Trébabu parish :

« Cupules : these are small cavities carved on the stones intended for ritual sacrifices, to collect their blood in Celtic culture. » (sic)

It is difficult to imagine how sacrifices could take place on vertical stones and how blood could remain in these cavities. If the Celts did occasionally practice animal sacrifices - like the Romans - they have nothing to do with the cavities.
In fact, the presence of deliberately dug cavities in the stone, has often been noticed on rocks that naturally outcrop as well as on some menhirs1, dolmens2 or Gallic steles. Despite multiple hypotheses, these marks have never been explained. It seems that here, in Saint-Mathieu, the stele could have been dug before the moment it was erected. Indeed, the archaeologist Etienne MOREL reports :

"At the beginning of 1926, following an exaggerated removal of soil and stones for the maintenance of the nearby road, the base of the lec'h 3 was exposed to a height of about twenty centimetres below the implantation line corresponding to the base connection, showing clearly the extension of the group of cavities on this base. I have made a complete tracing of two cavities located lower than those previously recorded.

This observation, easily verifiable, is essential because the cavities were either already present in the stone or the work of the stonemason himself, for unknown reasons that allow us to imagine a quantity of assumptions.
However, it is important, out of respect for our ancestors and our heritage, not to assert eccentric hypotheses as real facts.


-1- See for example the menhir below in the alignment of Kerzerho ( Morbihan). -2- Ditto on one of the stones of the dolmen gallery of the isthmus in Kermorvan. 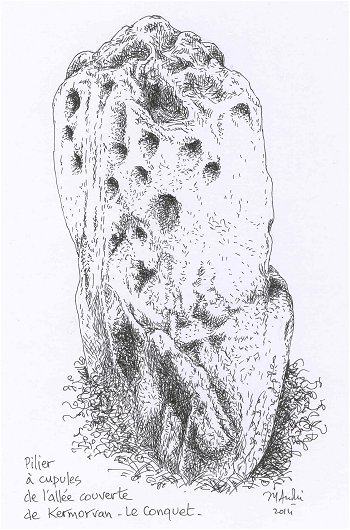 3- Lec'h or lech : old name of the Gallic stelae in Brittany. 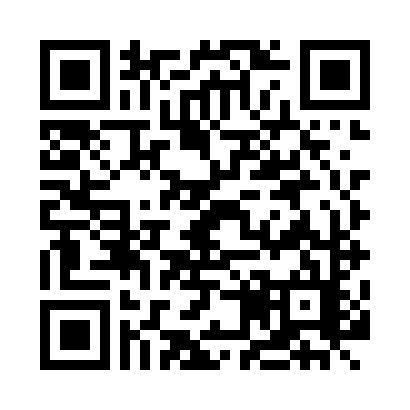