Seaweeds lower than the foreshore 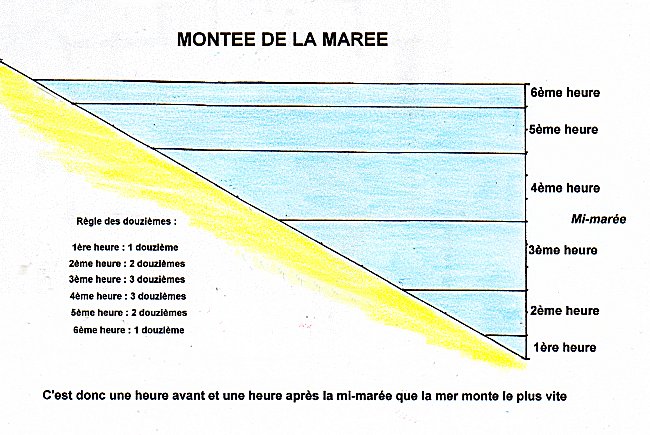 The seaweeds described on this page are those that are permanently covered by the sea and that form a real forest up to about thirty metres deep under the waters of Iroise. 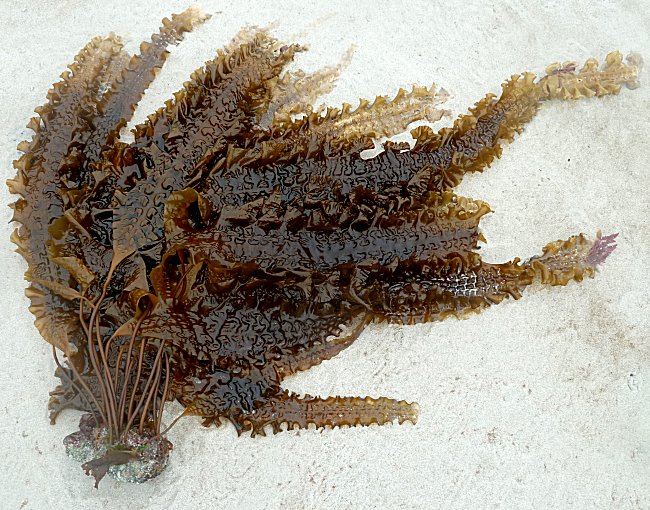 The saccharin seaweed ( laminaria saccharina ) or royal kombu is a brown alga whose tufts are attached by a crampon to the rock. Its long blades embossed over their entire length and with corrugated edges can reach 7 m. When dry, a white and sweet dust appears on their surface. This seaweed is rich in iodine. It is used in cooking, but also in cosmetics.

Of considerable length, this saccharin seaweed
is however far from being among the largest.

Two other species of kelp inhabit underwater forests and constitute the Breton tali that professional seaweed harvesters seek. They are seen at the port of Lanildut when ships are unloading, but they are only partially seen at low tide, and only the days of the more large tide.

Below, the horsetail kelp ( laminaria digitata ) or tali moan in Breton can be identified by its crampon fixed to the rock by kinds of fingers and by its short, smooth and flexible shaft stipe. On average 1 m to 1.50 m long, it can live five years to a depth of 6 m on rocky bottoms with little wave action. It is the one that emerges in some places during the lowest tides. It is very rich in iodine: about 70 mg per 100 g, which gets it the most sought-after seaweed. In the old days, cut from the boat with a guillotine, a kind of long-handled billhook, its harvest was greatly improved thanks to the invention of the « scoubidou » by Yves Colin, a Porspoder's seaweed harvester. Today, the seaweedpickers fleet, which is looking for it, is equipped with hydraulic scoubidous. In 2011, 25,000 tonnes of this seaweed were landed in this port. 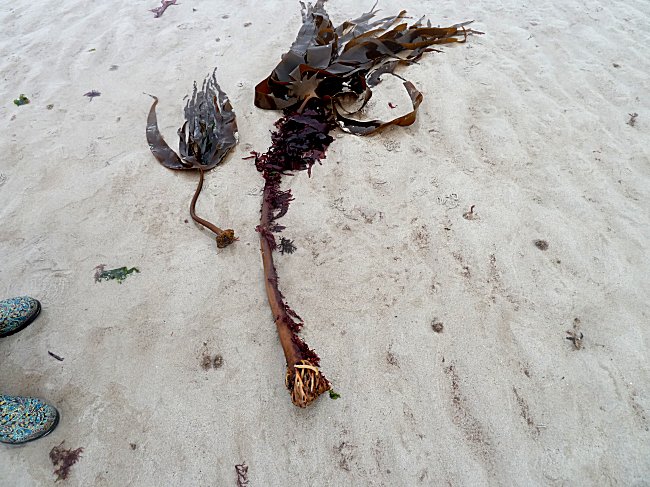 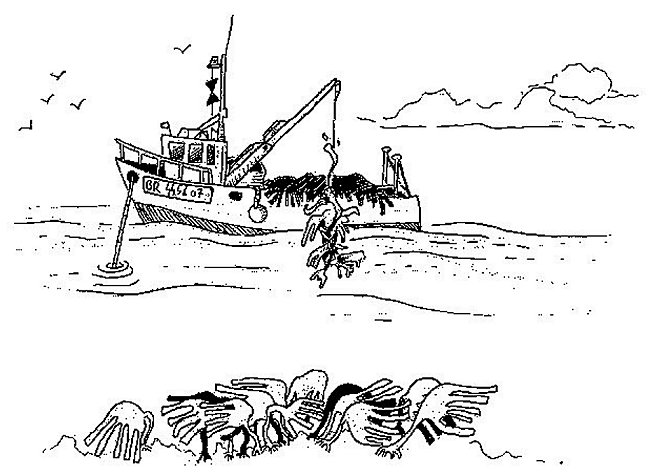 The scoubidou is a kind of large corkscrew operated by an articulated arm. By turning on itself in a field of seaweeds, it rolls up and tears them off the bottom and then deposits them in the boat by turning in the opposite way.
Drawing : Parc Naturel Marin d'Iroise


The rough kelp ( laminaria hyperborea) or tali pennin Breton owes its name to the rougher feel of its long stipe. It can reach a length of 3.50 m and a lifetime of 15 years. It is very abundant on the plateau bordering the island of Molène and likes deeper areas, up to 30 m below the surface. As with trees, age can be determined by counting the visible rings when cutting the stipe. In winter, it stops growing and resumes its growth in spring. Curiously, a new tuft of blades then grows at the end of the stipe and replaces the old one which comes off and will run aground on the shore.
The rough kelp is harvested using the « Norwegian comb » dragged by the boat and scraped off the rock. In 2011, 10,000 tons of hyperborea were unloaded in Lanildut. Since 2013, the seaweed harvesters who are looking for it have equipped their boats with geolocation beacons in order to optimize harvest management. Scientific monitoring is carried out because it is essential for the preservation of fish and crustacean resource, not to permanently damage the seabed that provides shelter for larvae and fry. 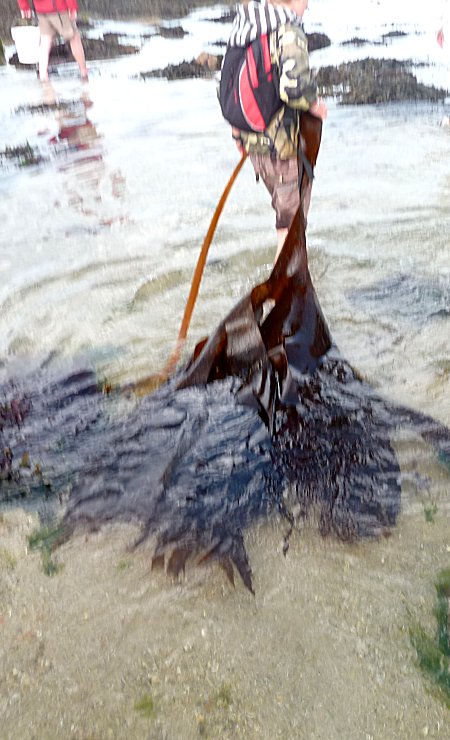 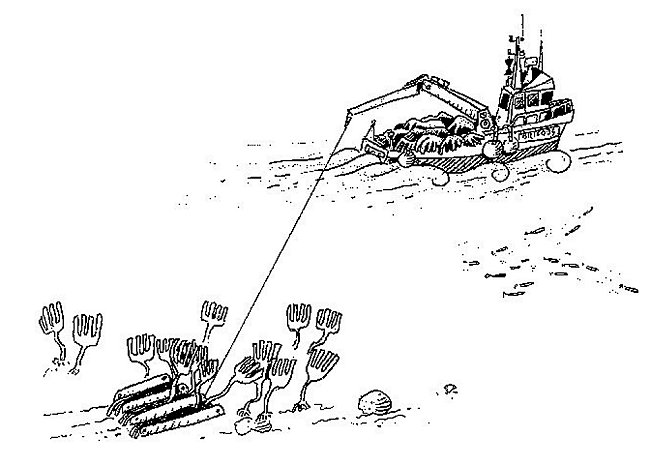 The Norwegian comb is a 1.50 m wide dredger.
It is towed and pulls kelp between its teeth.
Drawing : Parc Naturel Marin d'Iroise

These two kelps are unloaded in Lanildut and transported by truck to the Lannilis and Landerneau processing plants, which extract the alginates called E401 to E405 in the food industry.

The deepest kelp forests are still composed of another seaweed called bulbous kelp ( sacchorhyza polyschides) because it has a very characteristic strong yellowish bulb-shaped clamp with multiple protuberances. 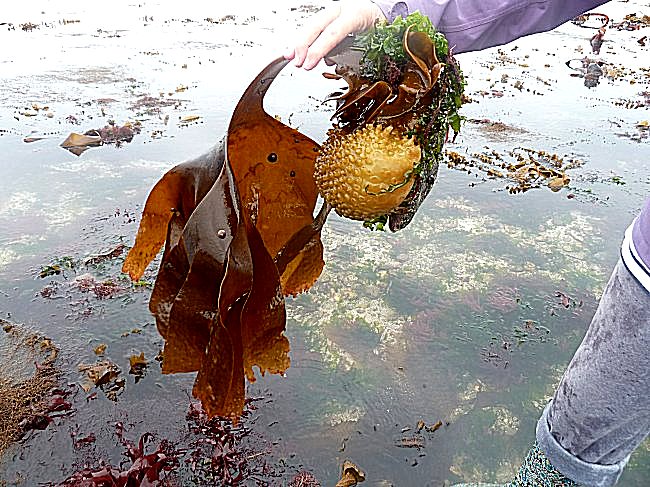 This stipe that connects the spike to the large blades is long and flattened like a sword. It can reach up to 2 m. 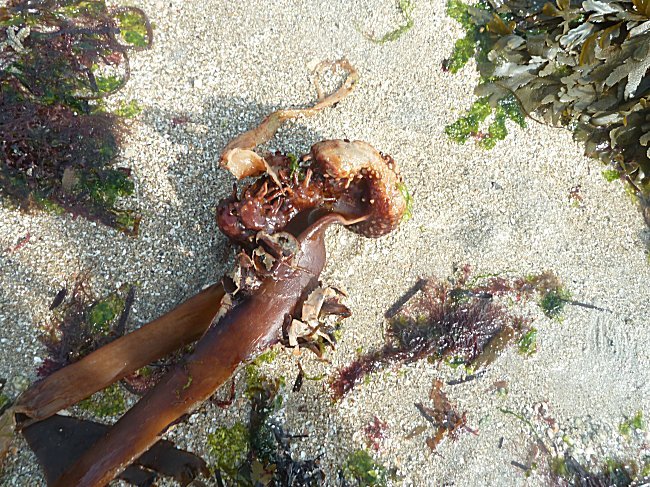 Thus, a whole vegetation flourishes under the Iroise Sea. It is grazed by a small fauna of molluscs and serves as a refuge for fry of a variety of species. For humans, it is also an important resource for a large number of families. In this respect, it is a heritage that must be preserved. 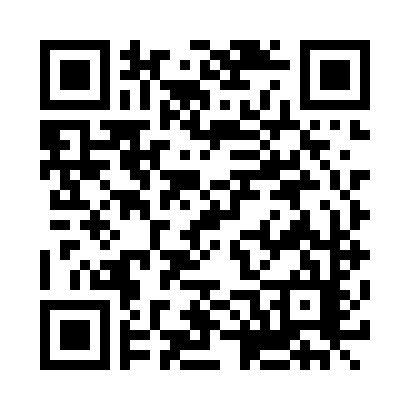