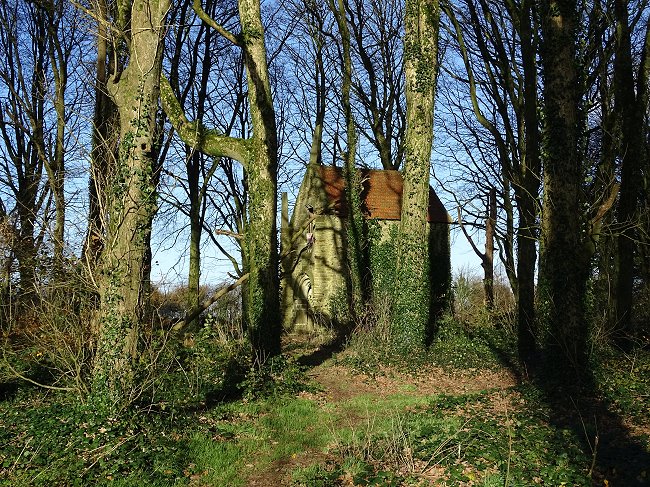 Access: Leave St-Renan towards Plouzané. After the roundabout of Ker ar Valy, continue towards Plouzané on the D38 road and take the fourth small road on the left towards Penfoul. Park 500 m away, at the first cross paths, and walk into the old main path that goes north, located to the left of the road. You can see the chapel among the trees 700 m further on the right.
Location of the building 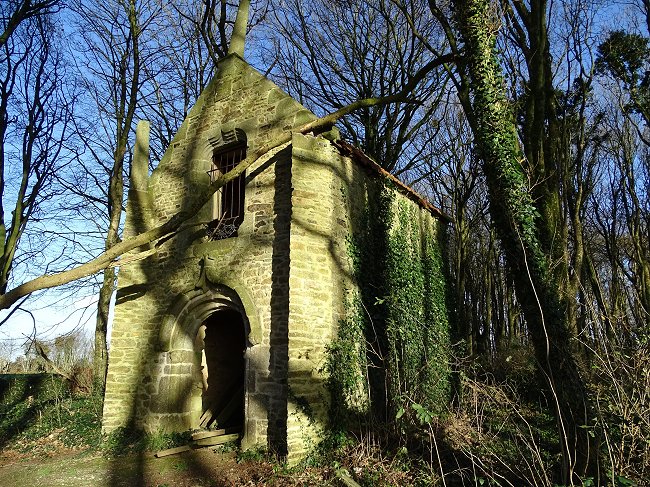 This small isolated building in the countryside, in the woods of Coat an Ibil ( Thieves Wood )1, in fact is not a chapel ! Despite its ancient appearance and its antiquity, this building was never used as a place of worship, but at most as an oratory. It was originally a hunting lodge built in 1870 by the owner of the Langongar manor located 300 m across the path.
The confusion comes from the fact that he took care, in order to preserve them, to reuse certain architectural decorations coming from the ruins of the chapel of the XVIth century that he owned on his domain. Thus he had put back in place, as they were in the old construction, the Gothic arches of the entrance door. 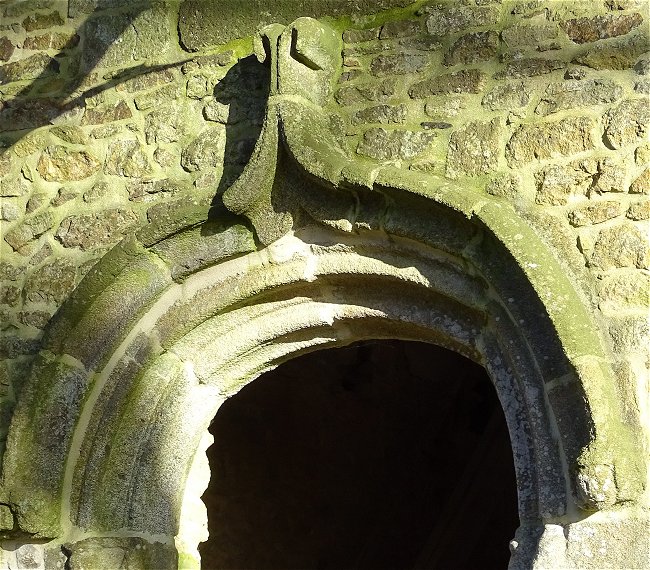 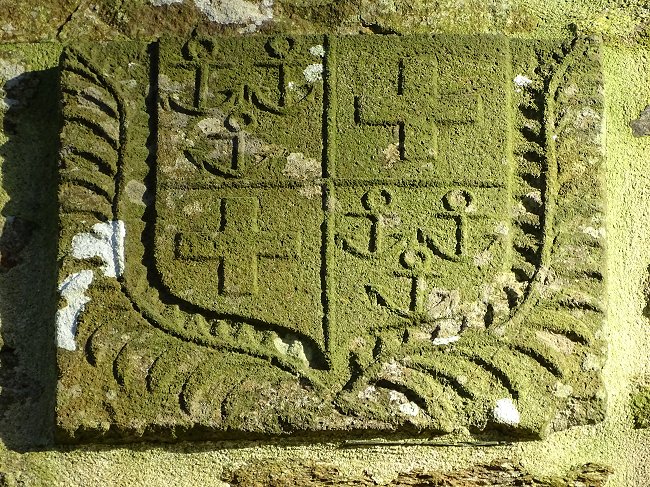 The building, with its rectangular plan, is now abandoned. A huge hole, perhaps due to the fall of a tree, has broken the back wall. 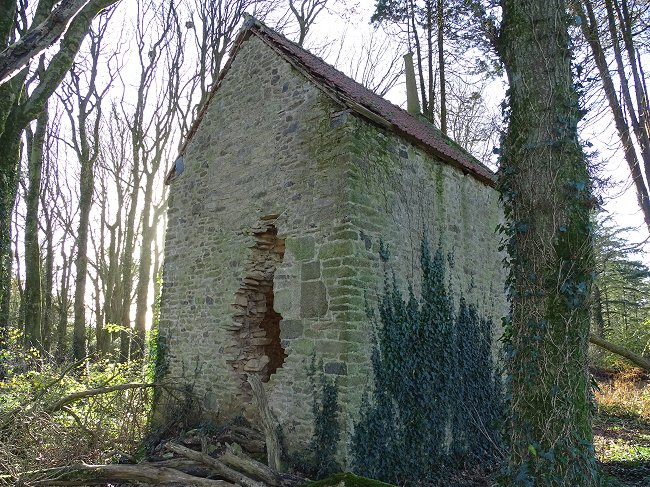 The interior has no decoration. It is cluttered with the remains of long beams and the walls show the trace of a floor under a window provided with a grid. 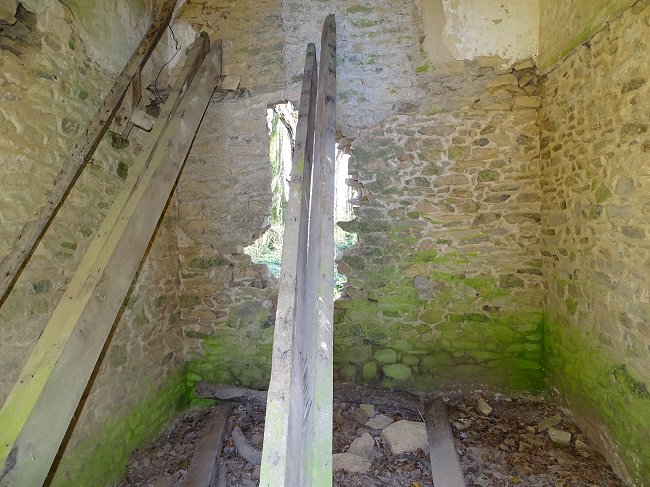 The roof still looks pretty good, but it is obvious that it is not safe from falling branches. 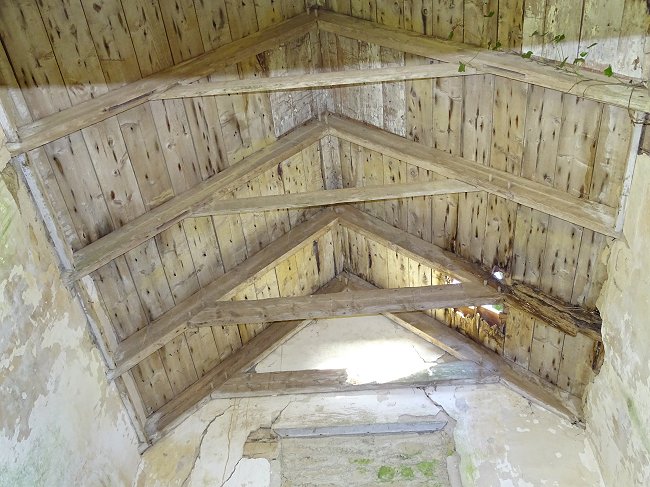 Because of its isolation, the building was used by the Germans during the Second World War to accustom the occupying troops to wearing the gas mask. All the openings being blocked, the soldiers had to endure the presence of a really toxic gas.

Today, the Thieves chapel presents hardly any other heritage interest than the architectural ornaments of its entrance door. But its name always arouses the curiosity of the walker.


-1- This name obviously makes believe that the wood was the meeting place of highwaymen. Such is not the case : Jean Lescop tells us in his work "Pays d'Iroise, sites et découvertes" that the chapel once bore on its western gable"three pinnacles surmounted by crosses : in the centre that of Christ, and on the sides the crosses of the two thieves". After the collapse of the central pinnacle, it can be assumed that the remaining statues gave the building and the surrounding wood its name. 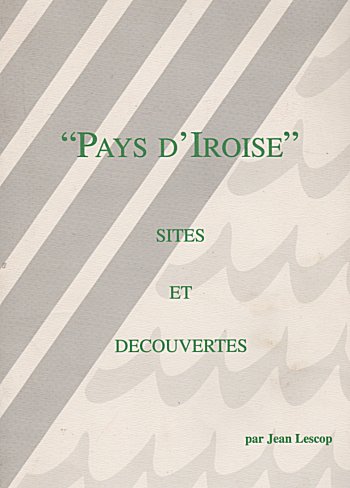 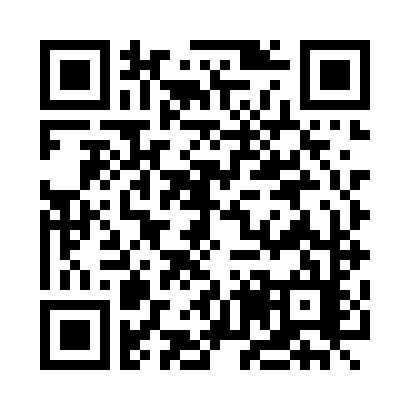