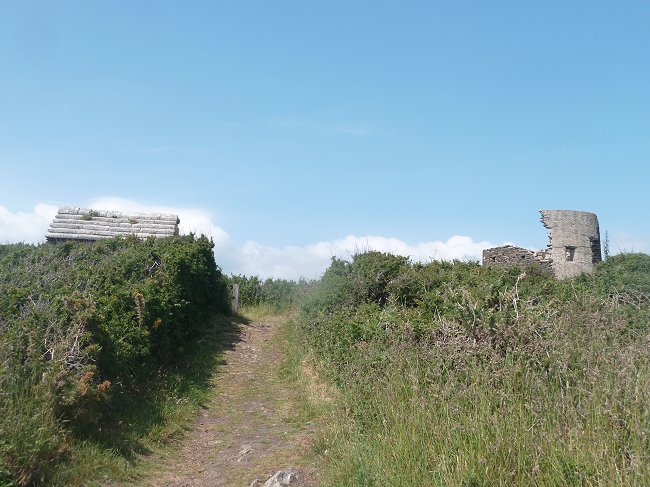 These lonely ruins in the moor between Trégana and Déolen are unique in the Iroise country. Indeed, all the other windmills have completely disappeared from the landscape. It probably owes its survival to the fact that it was consolidated by the Germans during the Second World War to make it a maritime observation post of the entrance to the Gut. 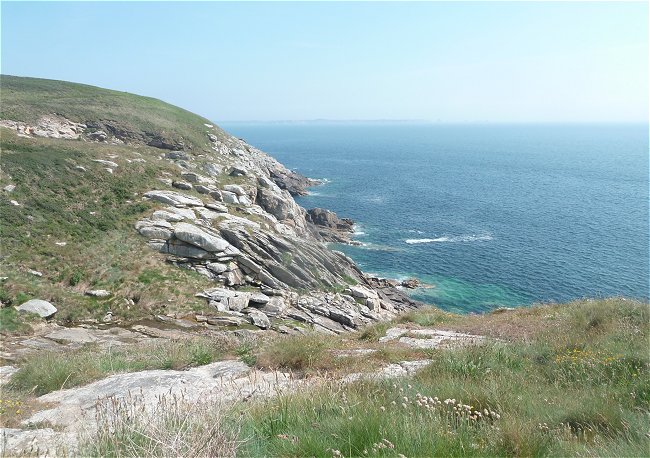 1- From Trégana, by the coastal path.

Leave Trégana beach towards Brest and, on the way up, turn right into the impasse du Goulet then park at the small car park at the end of this street.

The coastal path starts here. It is a beautiful trail but it has some rocky passages inaccessible to strollers or wheelchairs. Follow it for about 1 km and leave it on the left at a sign indicating the guard post and the mill of Ru Vras located at the top of the hill, 200 m further.

2- From Trégana, across the land. 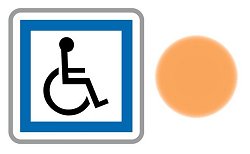 Leave Trégana beach as before in the direction of Brest but take a further right into rue des Landes. Continue straight on when this road is no longer paved. The ruins of the mill and the guard post can be seen in the distance. Turn right and park before the gate.

Follow on foot the wide path that begins on the left. After 300 m on the right, a sign gives access to the two remains that cannot be seen from the path.

3- From Deolen, across the land.

First follow the access indicated on our page Déolen. But instead of parking in the bend, continue the small road which goes up on the other slope. At the top, turn left into a road that runs alongside a house. Then turn right. Park there and continue on foot until you see the signs for the remains. 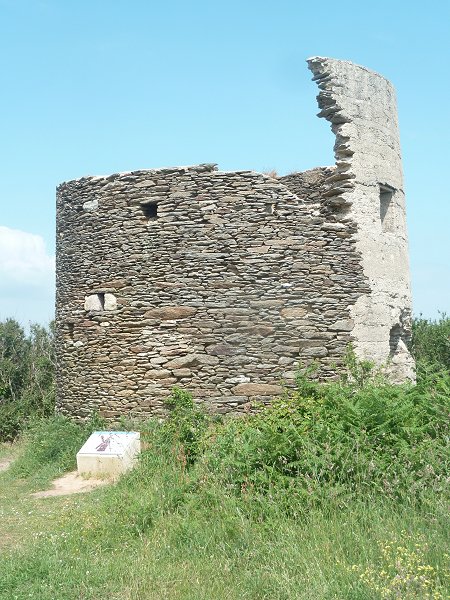 The 'Conservatoire du Littoral' and the 'Communauté de communes du Pays d'Iroise' have carried out major works to renovate and make accessible the windmill and the neighbouring guard post. Today surrounded by thickets, these ruins testify to a time when this great mill with huge wings was enthroned on the hill, not far from the wheat fields. 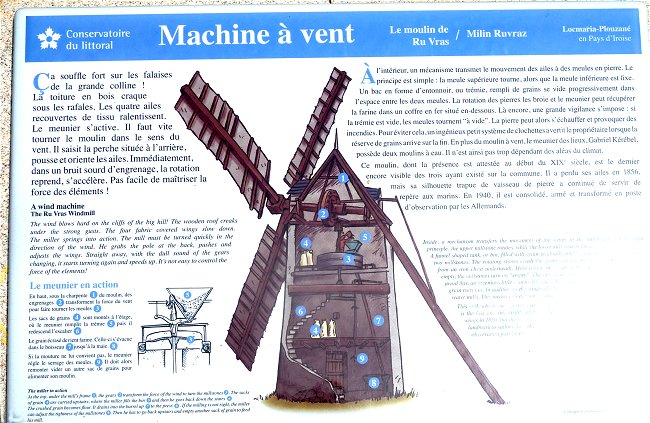 A nameplate perfectly describes the operation of a windmill. Its construction dates back to the XVIIIth century. It was used until 1856. In fact, the first windmills in France date back to the twelfth th century. From the Neolithic period, and throughout Antiquity, millstones were used manually by the population to grind the grain.
In Roman times, it was still the case and archaeologists still find millstones among the ruins of houses. The first water mills described by Vitruvius in the 1st century BC date from this period.

In the Middle Ages the windmills took over the technique, adapted to energy coming not from the bottom but from the top of the building. We also note an important improvement: the rotation of the whole mill head facing the Wind, using a long pole. Over the centuries millers have brought new improvements to their day-to-day work, such as the automatic ascension of grain bags upstairs thanks to the force of the wind or such as the alarm triggered by a rag, a rope and a bell. to indicate that the hopper had just emptied. 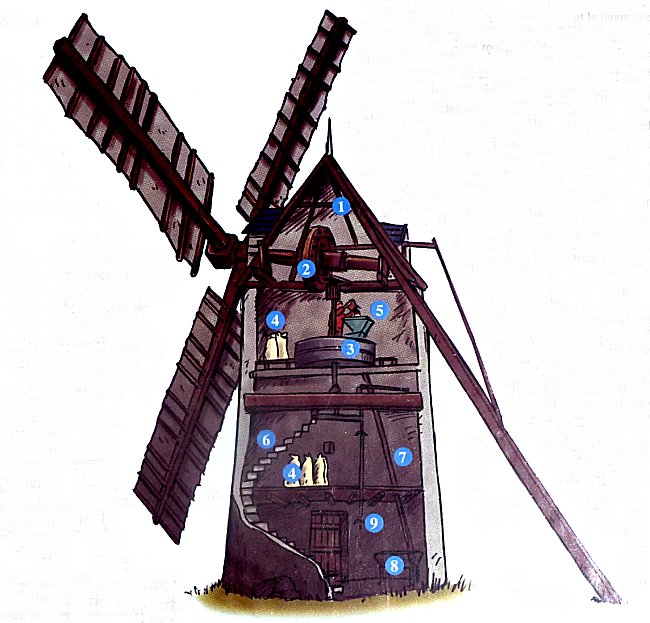 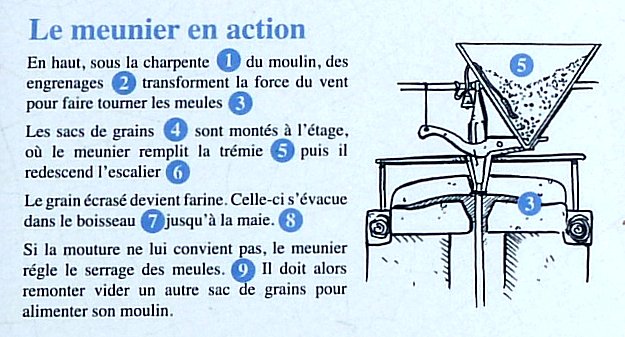 We see the modifications made by the Germans based on concrete: enlargement of the entrance and protection of the walls. This work did not prevent the collapse of part of the construction under the effect of a fire during the fighting of September 1944. 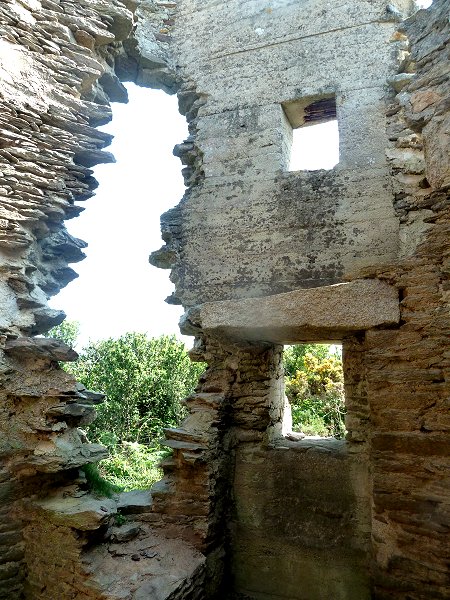 It is hoped that the public will respect this place of memory commensurate with the efforts made to safeguard it. The windmill and the neighbouring guardhouse are neither public toilets nor campfire shelters ( visit of the guardhouse ). And as their access makes it difficult to have permanent maintenance, visitors must demonstrate civility in order to keep these rare remains of our past friendly and enjoyable. 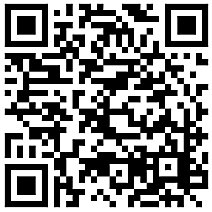