The giant menhir of Kerloas 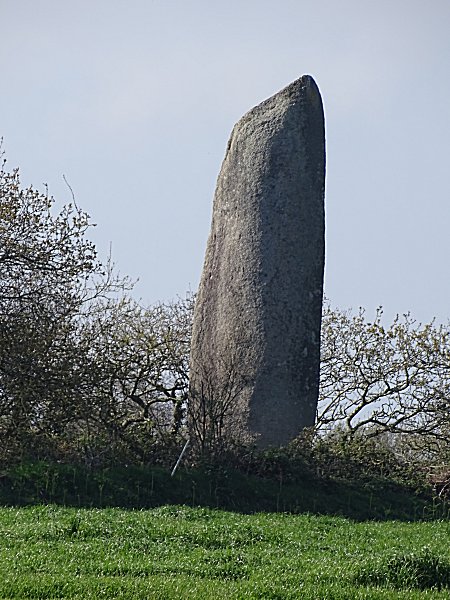 Private property. Open to the public

Classification Historic monument September 25, 1883
under the name "Menhir of Kerveatous 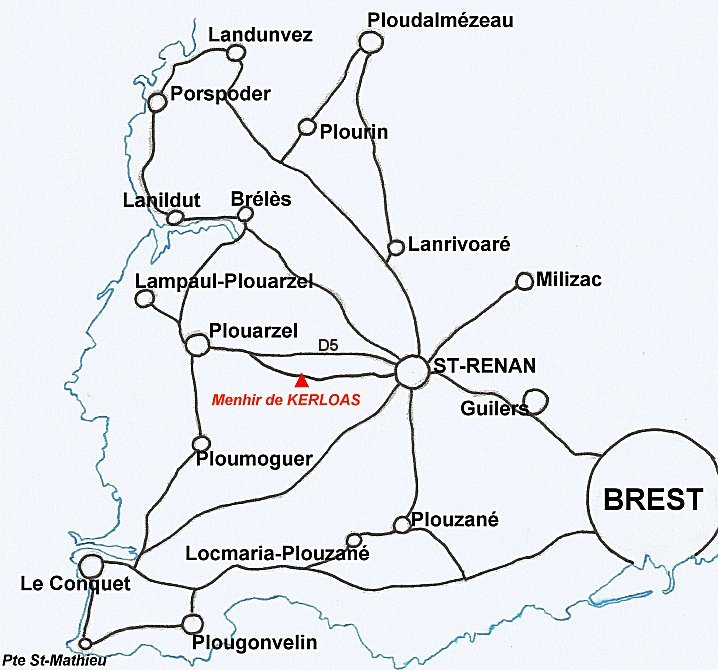 Access : From Plouarzel take the D5 towards St-Renan, then, 1 km further, at the sign, turn right onto the small road and continue for about 1.5 km. Access to the menhir is in a bend. ( sign )
From St-Renan, the same road is accessible at the west exit of the city by the rue du Général de Gaulle, then the direction Le Conquet. Take right the 1st road after the second roundabout ( sign). The road goes down then up along a forest and the access to the menhir is in a bend at the end of the climb. Park at the sign. The menhir is reached on foot from the edge of a cultivated field. 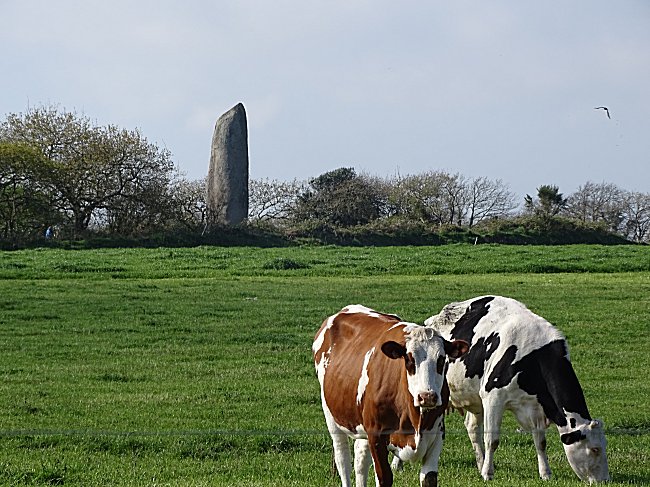 A monument like this can't be missed ! The highest menhir still in place in Europe, and perhaps even in the world, is situated slightly below the highest point of the Pays d'Iroise ( 142 m), 500 m away.
It dominates a pleasant and large space reserved for visitors.

Specialists estimate the total weight of the menhir to be between 100 and 150 tons. Composed of porphyroid granite, it was probably extracted from outcrops at least two kilometres away towards Aber Ildut. From then on, we can imagine the difficulties that the monument builders had to overcome to extract it from its rock, carve it, then transport it up the natural slope of the land, and erect it at its current location. 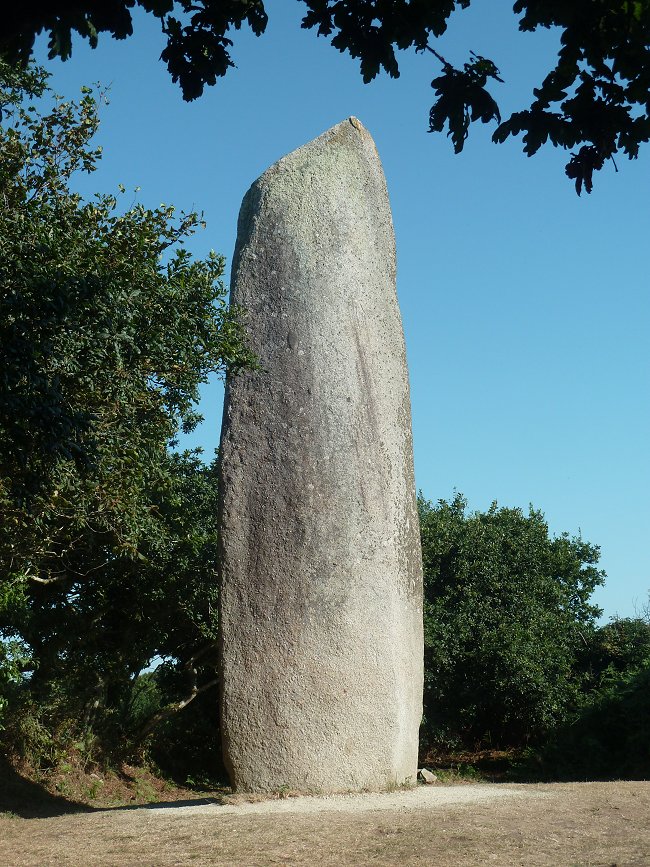 The Kerloas menhir has two opposite bumps, two small rounded protuberances about thirty centimetres in diameter, about one metre above the ground. For this reason that some people call still this monument "The Hunchback".
The presence of these two opposite bumps on a perfectly bush-hammered stone suggests that they were voluntarily shaped if not maintained. For what purpose? One can imagine for example that they would have been used to block ropes during transport. Another protuberance, but of a different type, is visible on the menhir of Kerhouézel, in the commune of Porspoder.

A rite was transmitted to us by several travellers of the 19th century. Jacques Cambry, a Breton writer, tells us, for example, in 1805 :

" New brides lead their husbands there, make them kiss the stone, to be mistresses at home. A strange superstition causes men and women to rub their navels against this pillar to give birth to boys rather than girls, and the stone is worn and polished to the height of the belt ".

For his part, in 1832, Christophe-Paulin de la Poix, Chevalier de Fréminville, told us :

« The newlyweds go devoutly to the foot of this menhir, and after having partly stripped themselves of their clothes, the woman on one side, the husband on the other, rub their bare bellies against one of these bumps. The man claims, by this ridiculous ceremony, to obtain male children rather than daughters, and the woman claims that by there she will have the advantage of being the absolute mistress of the dwelling and of governing her husband entirely »

Another legend claims that the stones scattered throughout the territory, including the Kerloas menhir, were thrown by the giant Gargantua at the population of Plouarzel because he was unhappy with the food they had given him to eat.

Several excavations have been carried out around the monument. They revealed a pavement about 20 m long, as well as 26 shards from the deposit of a ceramic vase from the Bronze Age, i.e. much later than the erection of the menhir. In 1961, following the clandestine excavation of a treasure seeker, another pottery deposit was discovered at the foot of the monument. The shards were deposited in the Museum of Prehistory of Penmarc'h.